Another electoral farce is over. This time, with large national and state victories for a fascist gang, actively fostered by the reformism of the institutional left. The reformists have defended their much-loved bourgeois democracy by tooth and nail, but they also have sabotaged and hindered people’s struggles, for the last two decades, from their thrones as managers of Brazilian capitalism. The Labor Party (PT) governments, which oscillated between social democracy and neoliberalism, brought frustration and disgust to the people. Added to this, the empty promises and these governments’ chasm between discourse and action, have led parts of the working class to delude themselves with an openly authoritarian and elitist alternative. But this road is too well travelled and it leads only to the precipice. Fortunately, reality is more complex and fruitful than what is being parroted by those donning the masks of the friendliest of humanisms, while effectively acting to shield the bourgeoisie off.

Hatred of the class-conciliation policy of the PT, added to a kind of festive inertia, touted as “criticism” of the electoral reformism of the “left”, have paved the way for a fake polarization between political forces. This division is behind several episodes of violence among the population. Its second round was characterised by the worsening and expansion of this violence. As in the murder of Mestre Moa, in Salvador – BA, by a Bolsonaro supporter; in the assasination of Charlione in Pacajus, in the interior of the state of Ceará, during a pro-Haddad demonstration; and in the death of Priscila, a transgender woman, murdered in the name of Bolsonaro.

As a response, the electoral left emptied the contradiction between capital and labour, as redefined by the aggravation of the neoliberal project in Brazil, of any meaning. It reinforced, in the most grotesque and reactionary way, the false polarization between candidates. It shifted the root of the problem and turned it into a question of knowing whose turn it was to be the manager. Even worse, it blamed it’s defeat on the people! Haddad and Manuela (running mate from the Communist Party of Brazil) tried to make agreements that could win them some votes with a number of sectors. They went as far as to negotiate “appropriate behaviour guidelines” with the feminist movement.

In their propaganda, a pacifist meaning of the word “love” was abused and misused. It was opposed to what was referred to, in general terms, as “hate speech”. By doing so, they mixed the prejudices of Brazilian society together with the understandable anger of the people, due to the extreme worsening of living conditions in recent years. Reformists are so confident that they are on the side of “love”, that they fail to perceive any political intent in abstention. But the truth is that the “unvotes” (invalid, blanks and votes that were not casted) represented 42.1 million voters. It was one of the largest abstentions in history in the second round of a presidential election. This large figure, despite the polarization brought about by the opposition to the PT and by despair, is no coincidence. It reflects the dissatisfaction that millions feel towards the very political model that’s being applied in Brazil. It also shows that a large part of the people harbor no illusions about the next oppressor that will hold the position of President of the Republic.

The election-mongers in the left described the vote for Bolsonaro as plain “fascism”. At best, as portraying the degree to which fascism had advanced in society. In any case, they reduced all possible political positions and behaviours to casting votes in bourgeois elections. A poll that was based on fragmented campaigns and on the proliferation of lies, bought and disseminated by big businessmen. The 2018 elections were marked by “fake news”. These were used as a tactic by the main candidates. This fake news spread among the people and caused a large part of it to feel deceived or confused.

Reformism also showed its true elitist face in the argument that voting for Bolsonaro was a result of people’s “ignorance”. At some point they advised to “exchange weapons for books”. But the people know very well what violence is! They are dying in wars that the state instigates! Those who don’t know and can’t understand the acute despair of witnessing deaths and the daily flow of blood, are the petty bourgeois left reformists, who sit on their couch and watch it all on TV.

The PT governments have been ineffective in providing any solution to the problem of violence. And that is one of the reasons that explain the delusions that many voters have regarding Bolsonaro. The conservative elitism of the reformist left, that creates a hyerarchy of political positions based on “erudition”, pretends also to educate the people on the ways towards emancipation and the construction of socialism.

Some sectors in the left have presented themselves publicly as “critics” of the PT government. But in the present context, they later capitulated and campaigned for the PT. This is no more than another result of those presuppositions about the people. Plain bullshit. Or even better, bullshit rooted in their own class prejudice. They assume that the people are fascists, same as Bolsonaro is. What is really happening is that, as a radical class, they haven´t yet figured out what path to take. But these leftists assume that Bolsonaro’s victory is the expression of a fascist society and that the PT could help to stop fascist propaganda in the country. Even though this is the party that has contributed most to create this diffuse anger felt by a betrayed and frustrated working class. In the reformist equation, society = state = elections and violence is completely overlooked. But there is a huge difference between humanism and the struggle for socialism. The parties of the institutional left have already proved, in every possible way throughout their existence, that they have chosen humanism and the management of class and state violence.

THE 2018 ELECTIONS IN CONTEXT

Since Dilma Roussseff’s impeachment in 2016, the right had been betting on the PSDB and its candidate in the 2018 presidential elections, Alckmin. However, Bolsonaro came to represent people’s feelings of hopelessness and opposition to the PT. He also boasted the support of some evangelicals and of the military, as evidenced by his vice-president, Mourão.

The Workers’ Party (PT) and its satellites were trapped in the Fora Temer (Temer Out!) and Lula Livre (Free Lula) campaigns. These led to catastrophic results. During the elections, the PT was fully behind the Haddad and Manuela ticket, as a continuation of its policy of class reconciliation. Meanwhile, the bourgeoisie no longer needed the services of the PT. And the PT reaped what it had sown. While it held Brazil’s presidency, it dutifully played the part of the right: it curtailed social movements and criminalised left-wing militants. It even passed repressive laws, such as the Anti-Terrorism Act.

The Bolsonaro and Mourão (PSL/PRTB) ticket won the election in all Brazilian states, except for the nine that make up the Northeastern region. Even beyond the elections Bolsonaro and Mourão as a captain and retired general of the Brazilian Army, it must be noted that more military officers were elected in 2018 than in any other year, 73 in total: 56 to state/district congress, 14 to federal congress and 3 senators. In other words, the Brazilian state will be even more militarised and repressive. There is already talk about cutting back social rights.

Bolsonaro’s openly fascist discourses, about “sweeping away Brazil’s reds”, “putting an end to activism”, in addition to a congress controlled by the military, set the stage for 2019. The loss of social rights will deepen. Their rule will be based on the whip and in the “shut your mouth up” principle. Repressive power will be strengthened. And, finally, class struggles will be more acute.

The current situation calls for the immediate setting up of Mutual Aid Committees, support networks and legal advice groups, for people’s self-defence and direct action. This is the task set forth for all unions, the student movement and the popular movements. We must defend every inch of the periphery and the favelas, the shanty-towns, the schools and universities, the factories and other workplaces, fields and villages.

The right is not bashful anymore and is now represented in Brazil’s presidency. They feel legitimised to practice all forms of oppression and violence. The institutional left will not be more radical in its actions, as it has become accustomed to and is compromised by its ties to the State.

The working class, facing a repressive steamroller that is heavier by the day, has but one option left: to shake off any reformist delusion and build up an effective revolutionary project, to fight against exploitation and capitalist violence, as this is only set to become even worse in 2019, led by an explicitly fascist government.

ALL POWER TO THE PEOPLE!

FIGHT FOR AND BUILD PEOPLE’S POWER!

ONLY AN ORGANISED PEOPLE CAN MAKE REVOLUTION! 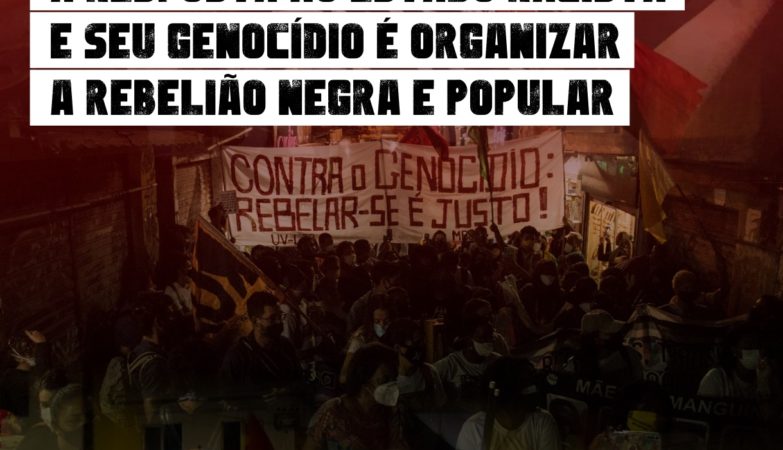 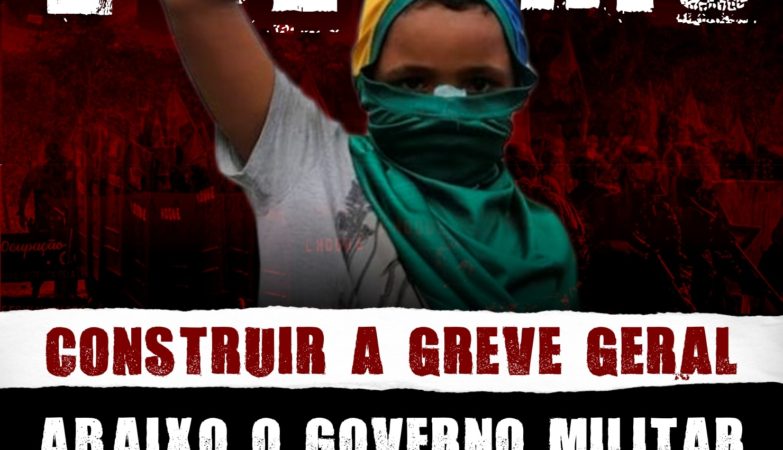 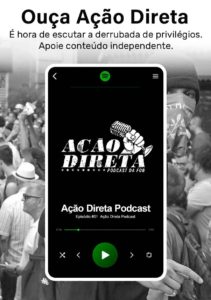 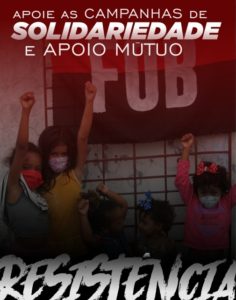 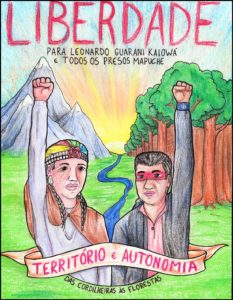 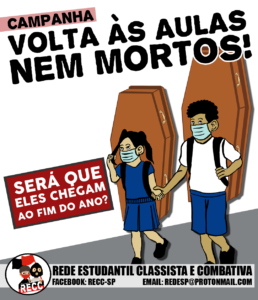 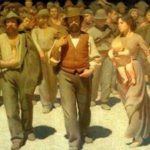 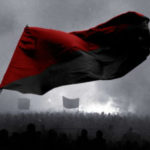 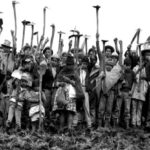 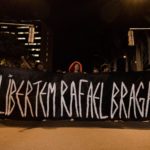 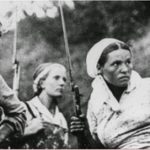 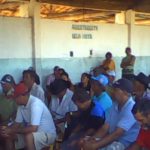